China’s Middle Class is Business For the World 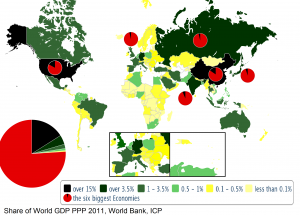 Let’s first read this from Forbes and Michael Zakkour:

China’s middle-class population is projected to exceed 600 million by 2022, or nearly twice the size of the entire U.S. population. Last year, China surpassed the U.S. as the world’s largest retail market, with spending topping U.S. $4.84 trillion.

If you are not active in China, it is a very good time to start. Chinese people are earning a lot, and you can tell by the number of cars as it grows every year. China and the US are in black on the graphic above at over 15% of world GDP in each.

27% of a big sales day here Nov 11 went to foreign brands. That means there could be over a Trillion in foreign sales in China.  In this number, we are not even talking about business to business sales where Western companies including mine work.

Lots of naysayers are saying China is ready to crash. Many of these people have been predicting the crash since the 90’s. It is the West that crashed in 2008 and not China.  All the naysayers should have been pointing their fingers at the U.S. The China naysayers talk about ghost cities and bad loans and housing bubbles.  20 years later they are still talking about the crash. I think another Western crash will come first. China manufacturing has been expanding consistently since a slight slowdown a year ago.   Everyone laments that China growth is down, but it is down to 6.9% annual and that is nothing to sniff at.

So come to join where the growth is or come to expand.  Nearing 600 Million in China’s middle class await you.  We can make sure you do not stumble by making sure you have Trustworthy Talent® on the ground.