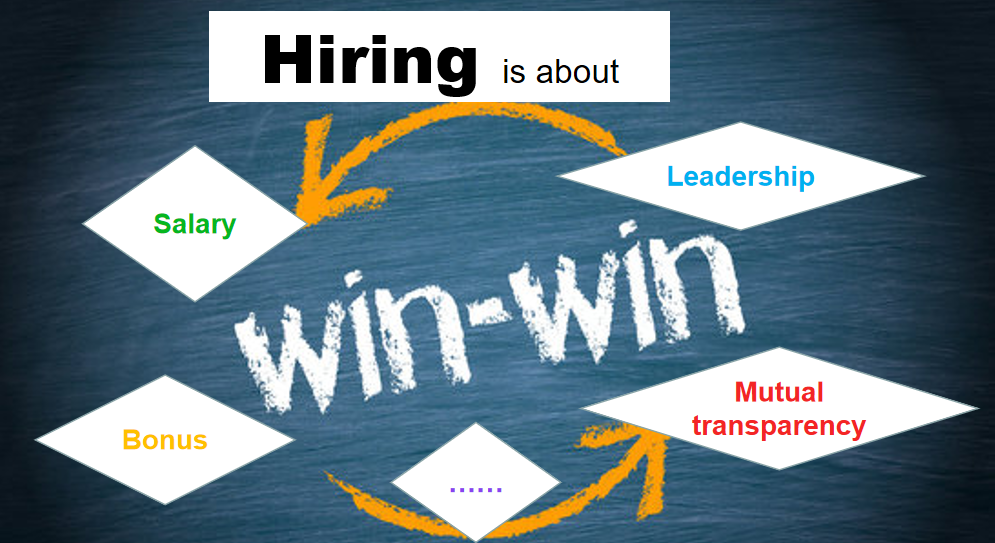 China win-win hiring makes for great hiring and long term success. What, however. goes into win-win hiring? Let’s assume your process gets great results like we guarantee.

Then, as a first step, we see a great need for mutual transparency.

Most hiring we know of shows mutual murkiness. The candidate tells most of what they did but covers up the thing that makes him or her ineligible for the placement. They further embellish in a way to wow the hiring manager but have left reality behind. Both these issues lead to a dissappointing hire as expectations from the interview are not met at all.

The hiring manager knows that the headwinds are high within the company, but paints a picture that also departs from reality and from the first day looses engagement and the energy of the new hire. He or she starts floating their resume quickly, and the hire is a failure.

Salary is another key issue at the time of the hire.  People looking for a new job, generally see this as a best chance to raise their salary. Once in the job, they cannot usually get as high a raise as in the job change, So they often ask for 30% raise of even more. If they are between jobs, you may get a break, but the question of why they are between jobs, may be the sticking point.

Further, they may often may want something to shoot for, so how you structure the bonus is an issue. While one bonus a year is best for taxation in China. I think some companies could benefit from fixing part earned quarterly or giving more such feedback faster. A year out can be hard to focus on and sometimes candidates lack feedback that could help them reach higher.  You may also like China Talent War .

Finally, Investing in the New Hire Throughout Works

This ties into the need for good leadership to go with great hires. Hires do so much better when they have the vision, space and feedback to take them higher. Then, the true win-win happens as candidates are happy to produce and know what to do, and the company gets more from the hire to make a deep win. See also What Do Chinese Employees Want?