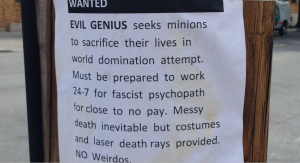 Let’s talk about great leadership. I interviewed a candidate for production manager the other day.

He learns from no one. He explained that he naturally knew a strong leadership direction and just kept going.

This candidate sees he is a genius, and everyone else is a lazy idiot.

As he talked, I saw he is proud to push every head down to get them to the work.

He did not exactly say that, but as I dug, this clear picture emerged.

Usually, we learn leadership by example. We are treated mean, and then we treat others very mean.

Result is the hire can be like the Evil Genius in the picture. China, and the US, has fewer and fewer people who will put up with bad leaders. Some bosses will buy into these bad leaders statements that leadership must be this way. They pay very low pay and Western Leaders often praise them for holding down costs, but the result is the factory has one genius and lots of useless workers.

Great Leadership is Not Natural, But Out There to Find

I started the business and immediately hired Paul Wang.  10 years later,  we still work together. He read a book 14 years ago, that said first you need to find a mentor. Pretty good advice. He looked around for people of sterling character and leaders he wanted to follow and could not find any except me who had given him the book.

Through seeing my example and a lot of talk and much more reading and practice, he became an admirable leader who could get people to want to do the work.  That is an understandable story. He could get me as a reference and verify.

One candidate took from his surroundings like his parents and teacher and later supervisors in business. He did not realize that he absorbed their selfish and short sighted views of leadership.

Many seeking leadership positions have read books on leadership, so they know how to interview at a business. They also believe it is unrealistic to lead like that in actuality. So while they interview well, they actually have no desire to understand and make workers successful.

They know as a leader that the workers exist to make the leader happy and successful. That is their model.

This bad leadership model exists all over the world. It is not Chinese, but because of Confucian top down emphasis, it is very common in China. The Americans have fewer excuses for why they are that way.

There is a big difference between a leader who makes workers do their work and one who gets them to want to do the work. See also Good China Hiring is Hard to Make and Critical.

This is what you need.  At times, every leader has to make some worker do something, but if that is his only idea, we will not recommend him to you.

In fact, we want a great leader who will also weed out all the bad leaders under him or her till your whole organization is glad to come to work on Monday. Getting the right leader for companies motivates me to come to work, as it motivates the lowest guy in your organization.