Hiring Based On a True Story Hurts You Bad 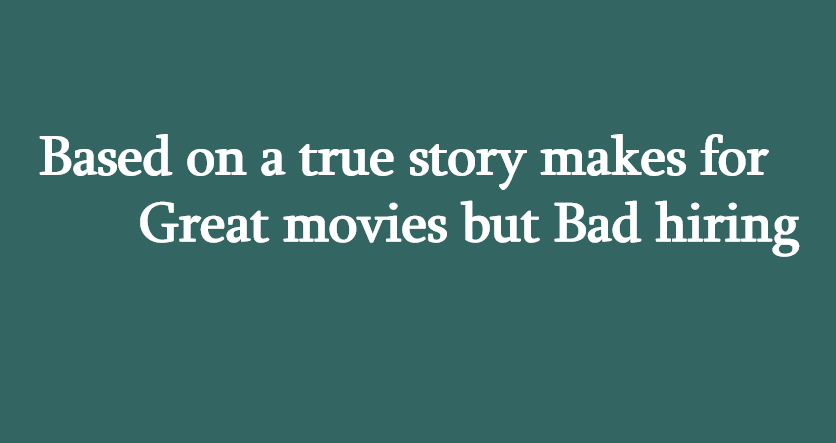 Think about when you have watched a movie and they say based on a true story. For those of us who find out the original story, we are usually deeply disappointed.  Why do the movie makers change what was a notable true story?  Sorry to say that life is not as exciting as fiction. So, candidates know that as well. They have to not only tell their story but capture the heart of the hiring manager somehow. The story they tell you is based on a true story, but the results when you hire them show that based on a true story is not even half what you expected.

Movie makers know that movie goers have short attention spans. They change from the truth to make the story more interesting. We pay then money to do that actually as hate being bored.

For example, we had one guy whose resume said he worked the last 5 years for the same excellent company. In truth, he had worked for 6 companies in that period and had been fired in each case because of his anger problem.  He worked an average of 6 months for each of 6 companies. He had worked 6 months in one company, so could easily tell stories of 5 years of growth in his work. His story was based on a true story.  Only instead of being a valued member for 5 years, that company had fired him at 6 months. You can imagine how that 6th company felt when they found out they were the 6th company he hoodwinked with his excellent English. See also How to Hire Great Leaders of Any Type.

Based on a true story makes for good movies but consistently bad hiring. We help companies and have over 95% successful placements due to our rigorous recruiting methodology. Making Great Recruiting Decisions is About Data.