Hiring – Looking for Truth or Performance? 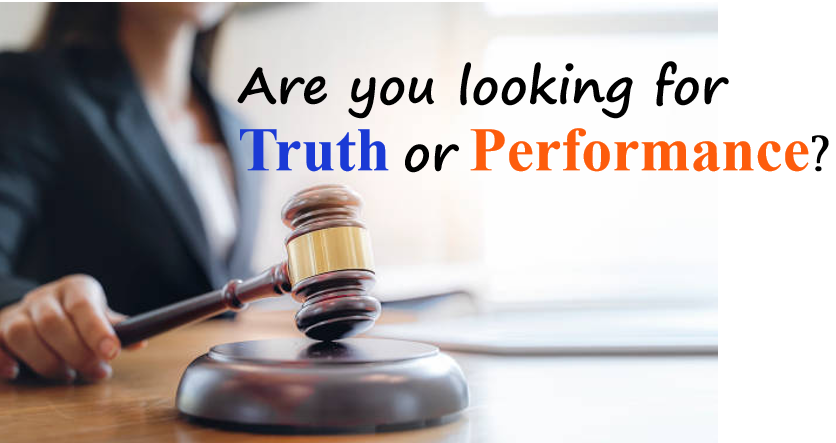 Truth or performance is on the table today. Interviewing is a learned skill, but some people pick it up better than others. As our business is about finding great hires for our Western customers, we think a lot about the process to include the interview. So when a news agency talked about why one witness in a recent criminal case was credible and another was not, I took notice. Note this:

“Travis McMichael was a horrible witness,” said former federal prosecutor Glenn Kirschner, a legal analyst for NBC News and MSNBC. “Rarely have I seen a defendant who’s put on the stand by his defense team really perform so poorly.”

The purpose of the court case was to determine the truth of guilt or innocence. The article talks about how the videos convicted the one guy and set the other free. Which is to say the “interview” was superfluous.   Travis was fighting to show the video was not right which was not convincing,  The other guy, Kyle, was saying the video was correct and buttressed it.

So I shake my head at the analyst saying the witness’s performance was not good enough. He is like rating the actor in a movie.  The last thing we need is for the witness to perform. We should not give out academy awards for witnesses.  In fact, we shake our heads when the witness can fool the jury into believing him. It is a travesty of justice.  It is the same when the candidate has fooled the hiring manager, and it happens a lot more than people think.

In hiring, the last thing you need is a good interview performance by the candidate. You need facts to know the truth about this candidate to see if he can be a great hire. It should not be about his or her performance. Then when you onboard him or her, you will be pleasently surprised as the person you interviewed is very much what you expect and likely more.  Glad to help you get there consistently.

Interview Process-Hard for Candidates to Be Real.