Luckin Coffee – Sad Tale – So Beware Who You Hire 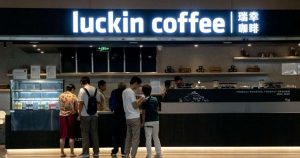 Did you buy Luckin Coffee shares? I feel bad for you. I think the bottom has not come yet. How about you in China. All I see is beware who you hire.

The founders are telling a story, and the Street is telling the story like it is true. I doubt.

The Street reports that Jian Liu is the bad guy, and he did all the bad things, and it did not start going bad till after the company went public in May of 2019. I highly doubt.

Chinese people knew this company was a wreck long before they went public. My GM laughs as he told me in 2018 that the company was doomed.  In November 2019 a glowing report called Looking to the Future came out in America. See also Starbucks China and What They Did.

Luckin Coffee fooled the Americans obviously while Chinese people knew all along that it was not trustworthy.

The founders got $4B in the IPO and then got another funding round of $1B in January. I suspect the founders have enough money now and doubt they will get more.  Then, it would make sense now that they are selling Jian Liu down the river and pretending they are innocent and the Street seems to be helping them.

The Chinese owners perhaps already got what they want, so their goal would be to quickly kill and bury this company.  We can also doubt that the main fault is COO Jian Liu.

To go public, Luckin Coffee had to show fabulous growth so they likely faked as many sales as they needed to hit their numbers each year along the path.

I suspect the fault is the founders and insiders who were helping them go public. Someone else would have to prove that absolutely.

This Can Happen to You – Beware Who You Hire

Um, I am not an investing genius. I run a recruiting company focused on Trustworthy Talent® as know that these things happen all the time and do not want my clients to suffer loss by hiring people who have the same morality as those who hurt the Luckin investors in the US. They fooled Wall Street who even gave them another $1B in January. You think the guy you are interviewing now cannot fool you?

I started this recruiting company just because Western Companies needed help here. They still do. Hopefully this event will be a wake up call to many.   We are here when you want to prevent having your company be like Luckin Coffee where finally you do not know where the money went as some tricky guy you hired got you slow or fast. They only leave when they cannot make any more from you or it is too inconvenient.  You will probably have to pay them severance I am afraid.   They will be glad to leave you holding the bag just like Jian Liu is now. Jian Liu is guilty but not as guilty as the founders I think, They may be most guilty and admit nothing.