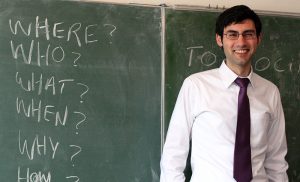 Is the best English student the best person?

My GM, Paul Wang, and I were talking about a customer issue, and it reminded him of a joke.

An Albanian robbed a bank and put the treasure in a safe that cannot be cracked without destroying the contents. It has a code you can dial in to open.

The Chinese police capture the Albanian and the safe, but see they cannot get it open

The Albanian cannot speak Chinese, so the police use a Chinese translator who can speak Albanian.

Then they interrogate the Albanian.

“You must give us the passcode, or we will kill you.”

The Translator copies this down and then carefully and forcefully explains to the Albanian.

The Albanian answers, and the translator carefully copies down the Albanian’s response in Albanian. He checks with the Albanian to make sure he got it right. He then looks at the paper and translates to  the police:

Best English is Not Necessarily the Best Person

If you did not laugh, then go over it again or ask a friend.

If you use a translator in China, you need to be very careful. It is a powerful position that is often abused.

I have seen a GM reward a translator from purchasing who was not telling them the truth. The whole factory bowed to the translator. She had the power to hire and fire through her translation. She successfully made herself look good and her enemies look bad. No one could fight with her as her English was best.

Many Westerners even feel the person with the best English is the smartest. This is a misnomer. Do not judge brain power by spoken English prowess. Beware if you only have one person in the factory who speaks good English or much better than others. See also China Recruitment Agency for deeper thoughts on hiring in China.

Especially a Problem for Hiring!

If we propose 5 candidates to a customer, the one with the sweetest English usually gets hired. Does that person have th est character, leadership technical skills? Companies need clear English in many positions, but the quest for sweet English often leads companies to lose something in the hire or cease to worry about character at all. After the hire, the guy with the sweet English proves to be the best at manipulating you. Then you will be sorry you brought in one who could hurt you like this. He could get you to fire the best person as that person threatens him.

You need to find ways to prevent these situations. You would hate to kill the wrong guy.