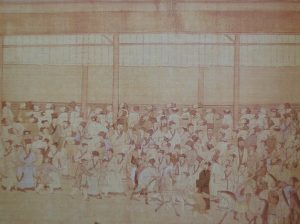 China may have the oldest bureaucracy history in the world

I served as a US Army officer before coming to China, and that was a uniquely valuable preparation for China. The US Army is a fine institution, but it is much bigger than any efficiency guru would advise. Due to its size, bureaucracy has made its mark on the US Army. Ah, China and China Bureaucracy are the same.

So I felt right at home in the bureaucracy here from day 1. I have found that American and Chinese bureaucrats are amazingly the same. They hate change, have a fear of any mistake, and leeway to help you if you are nice.

By understanding their natural fear, I got US supply depot managers to give my brigade ammunition for field training when no one else could get it done. And I got China government officials to sign off giving my company greater market access the same way in a previous job.

I was not a China expert negotiating access. I was a people expert. See also How to Hire Great Leaders.

Bureaucrats are people just like me, and they avoid blame naturally.
I need to wear their shoes if I am going to get their chop on my document.
Bureaucrats have little space to serve the customer. They are not rewarded for their great feats, but they get punished whenever events go wrong.

When 15 Saudi Nationals succeeded in blowing up the World Trade Center, US bureaucrats got busted for giving them the visas.  Ugh, if I were a bureaucrat, I would cover my tail when putting my chop on the line in that environment as well.

We Can Do Better With China Bureaucracy

So, as the leader, do not carry an us/them philosophy–as if Chinese bureaucrats are somehow worse than our own home country bureaucracy. Carrying that attitude will hurt you inside and outside your business. Care for the people who have thankless jobs. Finally, we all know we need leeway at times.  The people who get no thanks can give much if trust that we understand and care for their concerns.