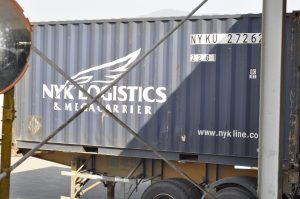 This is the actual truck we loaded. We could only pack the container partially as the product is too heavy for roads.

The ops manager realized that if I did this whole thing without him, then he would look bad. He also saw he could not stop me.

He produced a 150 item list of issues with the project on an excel file. Many of the items were overlapped, but some were new and useful.

He called a meeting and publicly pressed each manager to produce projecting his excel file on the wall and button holing managers. He had been discouraging them from working on this for over a year. Now he was embarrassing them to make himself look good.

I continued to care for managers and workers and defuse fear,  and I updated the project file.

Having fixed the relations between the Germans and the Chinese, I gained the trust of the Germans who began to push the home office to make things happen. They jumped on our China tested samples and got the same results and so China based samples were approved. The supplier quality got approved and we bulk ordered parts resolving their lack of interest in this dead project. The key supplier jumped to the mark and shipped ahead of schedule. Even the presence of this volume of raw material gave more confidence to the workers. I continued to coach and support the plant manager and worker turn over ended. Worker training started to make a difference.

The leadership of the Screw plant had a horrible safety record and 100% turnover annually. It was obvious he needed to go, but he was friends with the ops manager who protected him.

The GM acted and fired that plant manager.  I recruited and placed a real leader with proper production experience to take over and then coached him how to stay on the good side of the ops manager and slowly turn things around underneath him. I was doing the same at the engine parts plant next door. The screw plant improved on every measured factor and got clean to boot.

Initial run on the engine parts produced good parts, and we kept the machines running with better knowledge in China now. The machines ran better when run more. We waited on testing results with no little anxiety, but parts succeeded on all parameters.

German leaders authorized volume production and wanted it all in Germany as soon as possible.

All systems moved, and we kept the supplier engaged, the workers motivated, and the machines cared for. I saw we could ship a full container by the end of December and got logistics people moving.

I asked around to see what they do for a celebration and found out they never had.  They ordered a banner and some simple food, and we saw we could ship on December 31–40 days ahead of my initial projection.  The ops manager spoke as did the plant manager.

The picture is the actual truck.  China Business Leadership in less than 100 days revolutionized two plants, and the smiles all around were real as the truck pulled away. Quality was solid in Germany, and my task was done. Next week let’s go over lessons learned.  See them here.