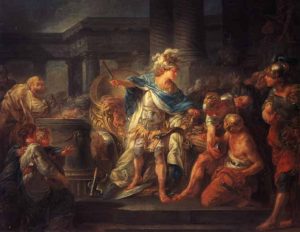 As unexpectedly as Alexander cut the Gordian Knot, so can you.

Their own China Business Leadership is what gets companies into trouble in China, and it is what brings them success.

So in the recent posts- part 1, part 2 and part 3.  I told the story of a puzzle, and how it got unraveled.

It remains a puzzle to me when companies get all wrapped up about getting people with the right resume, when what they really need is the right leader with the right character to make the thing go.

I had no previous experience with that technology and had no clear authority and knew no one in the plant and also did not know anyone in that region. Yet I unraveled the Gordian Knot in 3 months time in both plants by the same means.  Placement of proper China Business Leadership works. That is not the only time I have done that or seen it done the same way by people I have placed.  It is much less expensive to place the right leader than hope your own placement or other means will work this time.

Amazing that all they really needed to do was fire the operations manager 18 months before. They let him go a few years later at an even higher price. Of course when they fire him, they need the humility to find expert help to place the right person.

Why could the Western GM not see the devastating harm of the ops manager even though I brought loads of data proving the harm?  These expert politicians place some kind of spell on these Western Leaders. Data is worthless to dissuade them from supporting these harmful politicians.  The sooner they can face their denial and find this course, the easier it is.

Last year I touched a company that was in its death throes. They had sales but no production in their China plant to match. I learned enough to know they could be saved by leadership, but they were already too deep in debt and closed the doors. It does not have to be that way.  Those workers do not have to lose their jobs, and you do not have to pad lock your factory.

Mediocre factories can soar high and struggling factories can be all smiles when leaders of character and ability are placed. Whether these placements are Westerners or Chinese Nationals, they can bring astounding change, but you have to get the eyes that focus on character to know who these people are. (I do not mean internationally famous Western recruiters by the way.) Myself and two other Chinese leaders on my team have personal leadership ability and experience to untie the Gordian Knot.  So we are not just recruiters but leaders who know which leader is needed to resolve each Gordian Knot.