China Demographics and Impact on the China Market 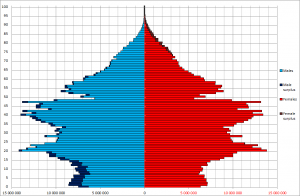 China Demographics are enlightening and worth knowing for anyone active in the China market. The problem is not too many babies for a 1.3 billion person country, but a huge shortfall in babies. See the Wikipedia Article for more thought. I also pasted some data below.

China Demographics in Our Life Time

Many European countries and Japan face a similar demographic. The number of people turning 18 each year is decreasing rapidly, so the workforce is decreasing now.

That is a huge growth market for China. The Chinese population will keep growing through 2030 and then start dropping, but the senior citizen population will be bursting at the seems.

The blackened portions on the graph show surplus and you can see that surplus of boys has become severe.

So in our lifetime, China will be a huge and prosperous country, and then it will start to decrease though always 3 and 4 times  larger than the US..

I think China will start to work harder to get more births to slow the drop. It is already too late to prevent a significant drop in population. You can imagine Chinese people are spending more and more on the children they have. So total spending on children has not peaked at all.

For people selling consumer items this total population and the income increase per capita are huge.  I think the even bigger story is the senior citizen flood. China is the place to be in our generation for market growth in any demographic as China gets richer, but a shocking big market for senior citizens