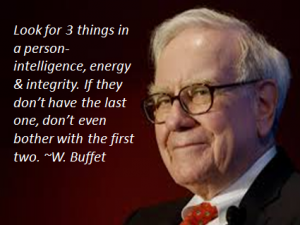 Integrity in China is more questionable than in the West, but in the West it is big enough to get this quote out of Warren Buffet which you may have seen before.

“You’re looking for three things, generally, in a person,” says Buffett. “Intelligence, energy, and integrity. And if they don’t have the last one, don’t even bother with the first two. I tell them, ‘Everyone here has the intelligence and energy — you wouldn’t be here otherwise. But the integrity is up to you. You weren’t born with it, you can’t learn it in school.”

Buffett and Munger were fortunate. They were both smart and worked hard to improve that advantage. Integrity, however, they chose.

“You decide to be dishonest, stingy, uncharitable, egotistical, all the things people don’t like in other people,” argues Warren. “They are all choices. Some people think there’s a limited little pot of admiration to go around, and anything the other guy takes out of the pot, there’s less left for you. But it’s just the opposite.”

First, we all need to take to heart what Mr Buffet has said here. The world needs integrity and generosity. Workers need kindness and understanding from us and leaders we empower.

So what means do you use to sort out those with lack of integrity? The vast majority of companies just use gut feel even though clearly integrity is critical.

My first job as a factory GM in 1997 I found I had a pretty good eye for integrity. That made me a big success in that first GM slot I had. Time showed me that gut was not as reliable over the long haul. Trusting other people’s recommendation was even less reliable.

So I developed more and more ways to sort out the talented and trustworthy from the rest and was surprised that others were not doing the same.

5 years ago, I had an American customer who said, “Do not worry about the integrity of the candidates. I can interview and find out. I was curious. He could not speak Chinese, and the proposed Operations GM was Chinese. We speak Chinese and have honed our skills in China for over a decade and knew we could not be sure through interview.

We attended his interview with the three candidates. He interviewed each for 15 minutes and sent them away.

I have found we can do better on knowing China Integrity in our hires though even a 2 hour interview cannot solve the intergrity problem. We found only an integrated interview and deep background check could get us there. See also Why We Background Check. Another quote of Warren Buffet says if you cannot get integrity for sure, then hire only dumb and lazy people. We totally agree with that excellent logic.