China Reform is Succeeding in 2013 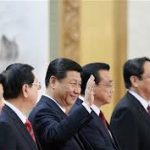 China Reform is on, and this article finally explains it well. Not everyone could misunderstand the Chinese economy. China made Africa rich buying minerals over the last decade but that will wind down and the Developed Countries stand to make money as China becomes a consumer driven economy.

Yahoo! put up a Reuters’ article that showed real understanding. See it here

China will grow slower over the next ten years but 7% growth is nothing to sneeze at and now growth will come from consumer spending more and more. That is an earthquake that we all should be paying attention to.

China Reform is Back On

In 2005, Chinese reform stopped and even took some small steps back. Fear paralyzed the government. They knew what to do, but were afraid to do it. 8 lost years later, the ball is moving. The Chinese government is starting to act much more like an advanced economy in how it resolves economics problems. This summer it showed its confidence in the market to make corrections instead of pouring in lots of money in debt.  The result has been good and industry has turned the corner in its own strength instead of a government handout.

Allowing more ineffective state owned companies to go under and allowing the pain of a slow down are desperately needed and this year they happened. I still stand by my estimate that China cannot become as rich per capita as the US, but it looks set to rise higher then Malaysia and a host of other countries in the middle income trap.  If China can continue on this more healthy path,  the future in China will look better and better. Hurray for government will and success in reform in 2013. I paste some of this excellent article below:

James Emmett, global head of trade finance at HSBC in London, said urbanization and the rise of China’s middle class offered openings to firms in Britain and beyond in sectors such as health, education and tourism.

“We are seeing a change in the nature of China,” he said.

As services blossom, foreign companies could reap a windfall of up to $6 trillion by 2025 in everything from retail trade and transport to hotels and finance, said Yale University’s Stephen Roach, a former chairman of Morgan Stanley Asia.

Zhu at JP Morgan expects investment to drop from 48 percent of GDP to 35 percent by 2018-2020 as consumption (household and government) rises to 60-65 percent from 50 percent.

Yet market worries about the transition need to be kept in perspective. Even if growth slows to 5 percent a year by 2030, Schellekens with the World Bank said China will still be adding output every year equal to the size of the South Korean economy.

“Even though China is facing quite a transformation, the long-term future is still a very positive one,” he said.

Perspective is so important in this China Reform process, It deserves saying again. China will be above 6% growth every year this decade and even at 5% it is adding a South Korea each year. So yes things are looking very good for China and that is good for all of us who are selling in China.