China-US Relations Not as Bad as in 1999

The Chinese Trade War and present US and Chinese President’s have certainly made everyone think more about the relationship. With some far right talk of decoupling from China more people have thought about the number 1 and 2 economies in the world and how unrelistic it is to decouple.  So phase 1 agreement got signed.

China-US Relations surely are often not great, but never as bad as when the US targeted and bombed the Chinese embassy in Belgrade killing 3 Chinese people in 1999. The morning after the bombing, the local police office in the city I lived in called me to see if I was alright. I knew nothing of the bombing, but since it is the only time the Chinese police station called me. I checked the news finding what my country had done and China’s reaction.

There were huge protests at several US consulates and the Embassy to include efforts to burn them. Over $1 Million in damages occurred and the Chinese government paid for that. The US government paid for the destruction of China’s Belgrade embassy.   The whole country was hot. Even my Chinese friends would get angry if I said it was an accident.

Note this quote from that time taken from Wikipedia

Few Chinese politicians believed the US version of events, believing instead the strike had been deliberate.[20]

Former ambassador Li Daoyu stated “we don’t say it was a decision of Clinton or the White House”,[21] but the Chinese government describes the US explanation for “the so-called mistaken bombing” as “anything but convincing” and has never accepted the US version of events.[22]

His comment is consistent with Chinese people thinking on the topic.

A few years ago, there was one surprising near miss you can hear/see at Youtube.  It was a one time event that did not recur, but surprising just the same.

China US Focus has a deeply insightful article up on the relationship that is well worth reading. Here is one short quote.

(The US) has massive trade with China and there are more than 250,000 Chinese students in American universities. Shaping the environment for Chinese decisions is a more accurate description than containment for American strategy. –

Further, there are 71,493 Americans living in China. That is a lot of links and even heart to heart connections. 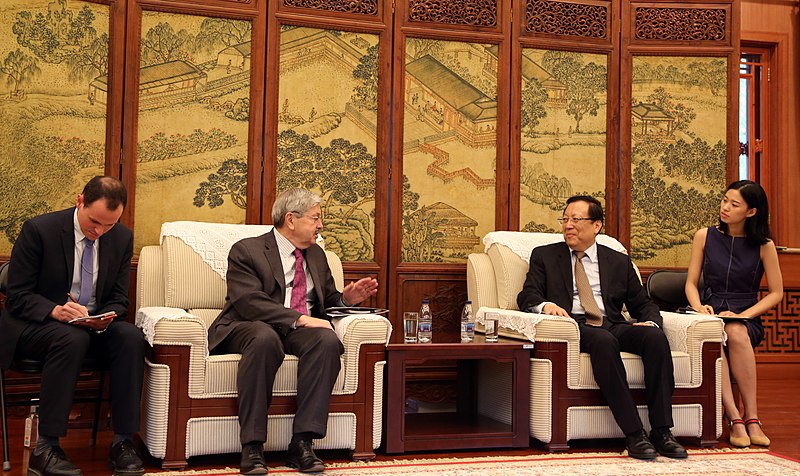 China surely has some comparability to Germany in the time after they easily defeated France in 1871. Fortunately, the connections are not that great. China knows that it is not easily going to take on any great power as Germany did. In fact, all the great powers know that now, so each will just push around smaller powers.

Enough military talk.  The economic connection will grow between the two countries as the products people buy become more similar as China develops more to be like the US. Stuff we make in the US is understood and bought in China. Two way trade will be robust despite setback of the trade war.

America just needs to relax and understand that China will act a lot like America did in the late 1800’s, and they will mature just like we did. See also Yes, Chinese people Will Buy More and More From the West.