Chinese Self Esteem-Why China Put a Rover on the Moon 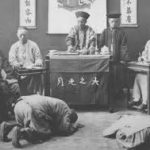 The word kowtow comes from the Chinese language

Chinese self esteem is on display on the Moon more so than their technology for all who care to think about it. China made world headlines this week putting a rover on the moon that is out digging now.  See a story on that here if you have not already.

Why do I say this is related to how China feels about itself?

First, let me say that this mission is great stuff and well done. Congratulations China.  I hope the Jade Rabbit does fabulously. Lets talk about another aspect of this moon shot.

How are Chinese Self Esteem and a Chinese Lunar Rover Connected?

Did Japan put a rover on the moon?  Could they have if they had wanted to?  Sure. Could Germany have afforded to put one on the moon?  Sure. Why did they not while China just did? Is there any intrinsic value in roving the moon? Why did the US go to the moon?  Or after the US went a handful of times, did we not bring enough moon rock samples back?

I have been to Japan and Germany and find they have little to prove.  They also learned in World War II that proving themselves had a higher cost than they ever want to pay again. So they prove less now. After living in China for several years, I visited Vietnam. I was surprised at how Vietnamese people looked at me.  They saw me as a man first and a foreigner second. In China most people will see me as a foreigner first and as a Man second. Vietnamese people gave me the distinct impression that they had nothing they needed to prove.  Unfortunately, Chinese people are not usually comfortable with their own skins.

China put on a great Olympics in 2008.  To those of us who were here, it was a nervous Olympics. Perfection was demanded all around as Face was the key consideration. London next put on the Olympics and had fun with it. They were not centrally worried about making a mistake. China clearly was. To clarify, Chinese confidence, Chinese nationalism all growing. however, the need to prove themselves is still unmoved.

Chinese People Usually Not Convinced How Great They Are

I took my Chinese friends to my Children’s International School Christmas Concert recently. They remarked that Chinese school performances are nervous affairs. Children that are deemed at risk of not performing correctly are summarily dismissed from the performance plan in the China they know. They saw this American school had no visible concerns about that. It was fun and relaxed. China is nervous.

China is a great nation, and has great people with great ability. Unfortunately, they are not so convinced.  A US study showed that Chinese children had significantly lower self esteem than American children. See the study here and here.

Maybe this rover will help close the gap, but how much?  (US plans to go back to the moon are all about NASA’s marketing ability to keep its budget year after year as they did not want to shut down after 1969.)

Hiring Chinese people, it is good to find those that are comfortable with their skins. They are worth finding. They will work hard each day and not centrally try to prove themselves. See also How Comfortable is China with its skin.