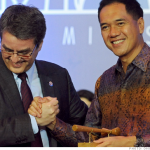 Celebration in Bali  -picture from CNN

The passage of the Bali Package WTO is good news for World Trade and therefore news for Western Companies with an interest in China.

I wrote some time ago that too much food is the biggest problem holding up the Doha Round. That is the case, but at least an agreement has been signed putting the WTO back in action.

China as well as the countries of the world have agreed to make trade work more efficiently and with less hassle at Bali and that is good news for us all.Hopefully continued head nodding will make trade easier for all and selling to China will be even better.

Now, there is a lot more to do for Doha to succeed. but any step forward in world trade is good news, and I like spreading that news.

China has not always followed all its WTO commitments nor has anyone, but WTO has made China a better country. The Doha round can do yet more if it makes continued progress.  Oh to get my own country, the USA,  to give up its embargo with Cuba. That is another thorn in Doha.

Globalization is a continuing trend WTO is a great support to that. Bit by bit they push back bureaucracies in our home countries and in China that make world trade harder than it needs to be.

The package could cut the costs of trade by 10-15%, according to the OECD, by slashing paperwork and easing border delays and transit bottlenecks.

So we need Doha to go forward, but this success can give momentum to the overall agreement.   It is good to see that 159 countries could come to agreement  If they failed then a full multilateral agreement would be remote. Hopefully $1 Trillion will push everyone to more agreement.