The End of the Chinese Business Miracle or Madness at Forbes？ 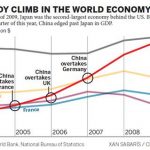 Chinese business can continue growing regardless of what so called experts say. Forbes says the Chinese Miracle is over here. Oh my.  Let me show you what Chicken Little has concluded.

For this to continue, China had to maintain its wage differential indefinitely. But China had another essential policy: Beijing was terrified of unemployment and the social consequences that flow from it. This was a rational fear, but one that contradicted China’s main strength, its wage advantage. Because the Chinese feared unemployment, Chinese policy, manifested in bank lending policies, stressed preventing unemployment by keeping businesses going even when they were inefficient. China also used bank lending to build massive infrastructure and commercial and residential property. Over time, this policy created huge inefficiencies in the Chinese economy. Without recessions, inefficiencies develop. Growing the economy is possible, but not growing profitability. Eventually, the economy will be dragged down by its inefficiency.

So Forbes first says clearly that because the Chinese government always props up the economy, the inefficiencies will do them in. However, they then follow up with this Chicken Little thought.

“Unlike three months ago, when investors were placing big bets that China’s policymakers would pump cash into the economy to spur growth, the markets seem to have accepted the fact that sluggish growth for the world’s second largest economy is its new normal.”

Now they are ready to bury China over dumping cash into the economy.  However, when China stops and faces the problem by not dumping in money via loans to bad businesses, then they are sluggish. By the way, Forbes casually mentions that growth this year will be a sluggish 7.4%. I wish my country could touch 7.4% in a good year.  Anyway, they lament that China always bails out bad companies in crisis.  Then when China changes its method, they are still no way with Forbes.

Ah yes, 2000 years later, people still can find ways to be unhappy when happy things are happening that do not fit their paradigm.

China will not overwhelm the West. The West may fall to China, but China will not reach  America which is their dream. China will grow and will be a huge market. The Chinese can certainly manage their present macroeconomics. The Chinese business miracle is certainly on, and the good news is that it is maturing.  Do not believe a contradictory Chicken Little.