US verses China in GDP Growth

Projecting the future is never easy, but to date this IMF forecast looks pretty good. 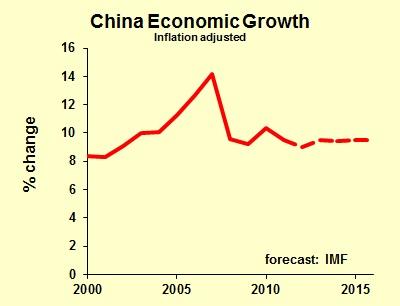 (this is taken from Forbes)

All major analysts indicate China had a soft landing in 2012 and will grow in 2013 and onward.  Soft Landing means China had pretty close to 8% growth. Admittedly, most of that was infrastructure while industry had a downturn.  2013 is expected to be strong and all the way through 2015 the IMF feels around 8% is likely with healthy industrial growth throughout.

(this is taken from Sahilalvi)

The US looks like this and has a mean growth rate of 0.86% which most everyone expects to extend past 2013.

So the extended outlook is for China to have ten times the GDP growth of America over the medium term.

So China takes work and wisdom to succeed in, but it has great promise in the short and medium term. It is already the number two economy in the world, so 8% is huge.

Please see my posts on How the Chinese Economy Grows and Grows for more details.