What Do Western Businessmen in China See? 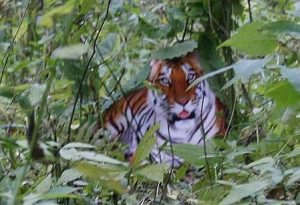 what did you see?

Note this research discovery from 2005 that I have never forgotten.

Shown a photograph, North American students of European background paid more attention to the object in the foreground of a scene, while students from China spent more time studying the background and taking in the whole scene.

The original report mentioned that the Chinese children saw more than just the tiger but also saw the surroundings. Find the report here.  Then see the actual fake tiger story that appeared in 2008 here.  A farmer claimed to have seen a rare tiger and had proof.  So he collected a large reward and later was caught.  I have pasted some of that story below.

Police have seized an old tiger picture, which he allegedly borrowed from a farmer in another village in September to produce his photos. They also found a wooden model of tiger claw, which Zhou allegedly used to fabricate a South China tiger paw print on snow.

Thirteen local officials have been penalized in connection with the scandal, including Provincial Forestry Department deputy head Zhu Julong and Sun Chengqian, the official in charge of wildlife preservation Wang Wanyun, and media official Guan Ke who were sacked for dereliction of duty.

Li Qian, an official with the wildlife preservation station of the Zhenping county, was also sacked for failing to make a site verification of the photos before producing a verification report.

Western Businessmen in China Need to Think Like the Chinese Children

Likely, in the process that guy paid off all the people who then verified the picture and the proof.

So why do Chinese children naturally look all around the picture and not just see the tiger?  They know from all the lying and deceit around them that nothing is as it seems, so they look around more to check the context.

So the report on the children was interesting to me at the time as it matched my experience in China,  We always need to do Due diligence.  Small Chinese children know that without this blog.

One could also say Chinese children are smart. They know to look at more than just the tiger and the paw prints provided. Chinese people know to keep thinking even if the local government had verified. They also know how to cover up uncomfortable facts better than we do.

I had to learn to look more closely as I went along here.  Chinese children picked it up from their families at home. Of course this also means that their Yes is often not Yes. They are more complicated, and so are their words.  It means in recruiting that they try to tell you what you want to hear. You lose the truth. Finally, if you hire people like that, you lose the truth in your company as well. We clean that up.