What Kind of Chinese Management Do You Want? 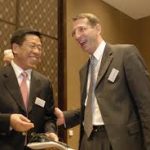 Which do you think would be a better manager?

Chinese Management is not universally bad.  However, many problems exist and one should think carefully about what you are getting.

A Chinese employee of mine left his American Fortune 500 company to join us saying, “The last American left in 2006, and the culture degraded from their own, and we became Chinese.”

What he means is that Chinese owned factories are often managed badly and now so is his former company. So that is good news for my company as we get this fine man’s services, but what about this poor Fortune 500 company that lost a man of this caliber because professional respect and trust had gone away once the last Americans left.

A funny quote can help us think more.  “As one female contestant on a Chinese dating show said, it’s better to “cry in a BMW than laugh on the backseat of a bicycle.”

Would you want that woman leading a department for you?  What are her values? If she was a White Suburbanite would that make a difference? From the picture can we say which man could manage better?  We look deeper on all these.  See also Great Resumes or Great Hires?

Chinese Management Does Not Have to Be Your Downfall

China has people with the character and ability you need.  Having the right functional skill goes down in importance as you go up the management chart. Do not forget that the needs of managers are different than functional ability.  The character to be a leader along with a desire and vulnerability to develop continually can be found in the West and among the Chinese people. It takes a good eye and focus in China to know which person will work as a productive manager.

Another gap is that many managers only hire weak people under them, so they do not feel threatened. In the West and East it can happen, but we find it too common in China. These must be weeded out. They are hard to spot.

American companies indigenizing or even if not indigenizing often feel trapped with bad managers or hopeless to place the right people. More than that some companies blindly think they have the right people and are surprised to see what happens when they turn their backs.  We can solve these problems. No company should have to live with marginal or bad Chinese Management.