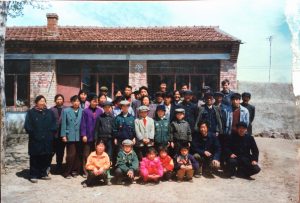 I kind of like thinking in terms of Old China New China. I have lived in China since 1991.  As you may imagine from the picture, I have first hand felt the effects of the change, and I do not mean the trains are faster.

China was so obviously Chinese in 1991. Now, you possibly sometimes forget they are Chinese and you are in China. China is changing fast, but will always be China which is far from the West. However, Old China is less familiar to us.

Old China studied the ancient texts and did business along Sun Tzu’s Art of War thinking meaning Chinese businessmen see business as win-lose and nothing more.  Chinese taxi drivers are often confused if you thank them for the ride.  They feel you lost as paid the money to them.

Many people now study from the Western business books. Many of them are quite suitable for your business.  However, most are still lying to get the job and lying to keep their job. It leads to very political company work when everyone is speaking for their benefit as opposed to the company’s benefit. See Office Politics Undone.

I noted that China Briefing wrote about Old China New China, and I quote a few words below.

The company in my example didn’t realize it was partnering with “Old China.” It’s a shame they didn’t hire that Chinese woman before they formed the joint venture.

Naturally that joint venture was a mess as most are due to no one really understanding old China thinking. China is changing and half way between old and new China. Finding the right suppliers, distributors, and partners is tricky business as most business owners are old China thinkers.  They want to make sure you lose and not them.

Getting the Right First Person So Important

We have a customer now who is first hiring a Trustworthy person of Talent though us, and then having that person help them with finding all other partners and developing registration plans.  Hiring the right person and especially the right first person is so important in China. Some are just lucky in finding the right person. Others believe China is a bad place as they did not get a good first hire and everything went down from there. Most muddle along with more politics and turnover of good people than they should accept.

There are trustworthy people to be found even in Old China. Notably, it is a hard world to understand and your intution will not serve you well. Actually, data should always be used to check when your intuition gives you some thought. Then you can get beyond battling politics in old China and in New China. See also 3 Ways to Beat Office Politics.