Brooking put up a great study on Chinese urbanization that we should consider.

The Chinese government loves that a famous Western economist said there are two big forces for global prosperity in this century.

So why is this a big thing? What does it have to do with doing business in China?

China is developing the biggest market the world has ever known, and the biggest urban workforce as well. Their opinions. Their buying. their work habits. All are and will influence the world.  Chinese students have already made American kids study more.

Chinese Urbanization Means Everyone Has Changed

It also means a vast country all uprooted. You meet someone in Shanghai or Wuhan, and you naturally ask where they are from.  Very few people are from these big cities.  How many of your friends are not from your local area?  I have lots of friends where I live in Wuxi and cannot name one who is from Wuxi. What does it mean that the whole country has gone from thousands of years as peasants to being office workers, factory workers and retail sales? Not only have hundreds of millions of people urbanized, but hundreds of millions more are coming. America totally does not have as many people as will urbanize in tens years in China.

Moreover, everyone is experimenting and trying to find themselves in this brave new world. Where I live and work and shop did not exist a dozen years ago. The places I knew in the 90’s are gone. America is still roughly the same when I go back. In China the streets I drive on could not have been conceived 20 years. You can drive thousands of miles across China on a gleaming highway that did not exist 10 years ago. 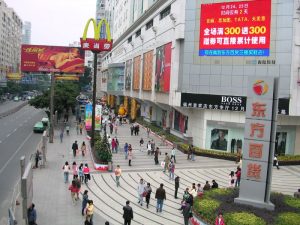 They have developed from nothing to monstrous gleaming cities. As I have said before, I took my Chinese wife to Chicago the first time, and she was disgusted. “It is so old,” she said.  Life has changed for 500 million peasants and even those left behind have been changed.

My Chinese GM grew up in a teaming rural land and now the 5 schools that were near him are all closed as all the peasants like him have left. His two kids are growing up so differently than he.  He had no toys and only

This Whole New China is Something Very New

Yes, the scale and drive of the Chinese people is global news for this century. Surely it means hiring is very different here than in the West where things are so much more sedate. A friend of mine moved from Shanghai back to Ohio. He said he misses China. I asked why, and he said. “I miss the energy.”  See Getting Good Chinese Managers.

Finally, Chinese urbanization of a billion people means a lot of energy. It is a shocking world, and all of you have lots of stuff they have made in your house. Now you also see then as tourists all over the world. Something has changed and is changing. A hermit peasant kingdom for much of its 5000 year history has moved and is moving.   The world has changed because of them and will yet change more.