Cultural Comparison of China and the United States 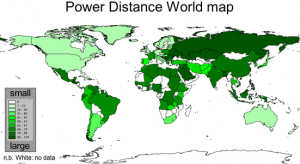 Comparison of China and the United States can always show vast differences. This tool I introduce today is no different and very insightful.  I want to note the  Geert-Hofstede country comparison tool. They are interesting to take a look at.

I want to note power distance and individualism in respect to the US and China.

Power Distance Cultural Comparison of China and the United States

It is well known that Chinese people and Westerners have vast differences in power distance. The tool shows this.  I want to think with you on what our take away from this idea can be.

My power distance in working with people in my business is super low.  A dozen years ago, I noted that some of my workers did not respect me as I did not appear as a ‘strong’ leader. I considered how I should change my style. Then, I had a breakthrough. My best workers did respect and even wanted the leadership style I had now. I needed to hire more people like those people, and I went about to hire them.  So Chinese people may accept horrible bosses, but the right ones want to work for the ones who do not just talk down at them. Further, the top down guys pay bad. You also may like China Worldview Issues and Your Company.

Individualism Cultural Comparison of China and the United States

China has little individualism, but it is growing year by year especially among more Westernized Chinese.  If you look at several countries on the comparison tool, you can note that high individualism and high indulgence go together.

People from the US give tons of space to their kids and relatively little ugly criticism. That is indulgence. China criticizes kids day and night in school and at home to do better in school and other issues of face.  That is low indulgence.

Chinese employees thus often carry little personal emotional confidence in their pocket. This will impact them especially in new or uncertain relationships. A little caring will go farther than in the West though everyone needs it.

On the other hand, Chinese high school students study hard.  American high school students party and get hurt in a myriad of relationships that are messy and often scarring for life. That is indulgent though it still hurts, and it does lead to individualism. See also 3 Keys for Success in China.

Covid-19 shows how Chinese Collectivism is valuable as opposed to how individualism worked in the West.

Summary of Cultural Comparison of China and the United States

China and America are similarly driven by competition, achievement and success, but quite different in other measured areas like collectivism, pragmatism, power distance and ambiguity where China is high. Not all Chinese people are like this, but these are common factors.

We do well to understand the differences and make adjustments in how we treat and choose Chinese people.